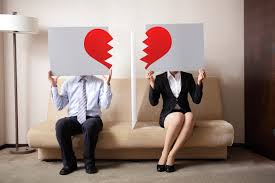 Somehow, during the course of my relationship, I had developed my own “foreign” language. I thought what I was saying to the man I was in the relationship with was clear. It seemed so obvious to me that something was terribly wrong. There were long stretches of time I gave up speaking to him at all.

Did he think my silence meant that I was just fine with this awful status quo? Certainly, he recalled that I had tried to talk to him about these things numerous times, but he made it clear he didn’t feel like talking. He’d make sure he was barely around during our waking hours. The ones we used to be in together. Little by little, he had more and more “plans.” Or there was a movie he “really wanted to see by himself” Really? What kind of movie is that?!

Now that I look back on all those years with my Ex, I realize bit-by-bit how the grow-apart happened. And it happened so gradually that I didn’t realize it.

I had not been speaking my truth for years. Years! I had been merely saying what I thought he wanted to hear. (There’s that foreign language again) I was being “understanding” even though I completely did not understand what the heck was going on with us. And also, to get through a day with no ugly moments. Moments that tended to make me feel like crap. Moments that made my bones ache. Our relationship had grown brittle. The softness that exists between lovers had long dried up. The shared jokes, or the stupid “bits” we had that no one else outside of our coupledom would ever be privy to. All gone. A tornado had ripped through our love relationship. There were just some matchsticks and a few tumble weeds blowing through our demolished love shack.

Now I realize that all those days of not rocking the boat had added up to years. Years where I never truly said what I was wondering about. It wasn’t that I was scared of bringing it up. I was TIRED of bringing it up. How many times can you request a face-to-face “What’s happened to us?” conversation and get turned down. Isn’t his very action in avoidance the answer to my question?? Of course it is!!!

The irony was that by never asking, “How long can we go on living like this?” out loud to him, meant I had the answer – “As long as you let this go on.”

I was just freaked out. Every time I tried and it didn’t happen I freaked out more. Because this was not a small thing, this ending of twenty-four years of couple-hood. At least it wasn’t for me.

But the silence was deafening. And it was killing me. It was killing us both. The day he packed his bag and walked out was also a day of silence. Sad silence. Stunned silence. But a few hours after he’d gone, I turned on some music. Music that I loved. And I cried a bit and I took a little nap. And I woke up feeling relieved. A relief I had not expected all of those times I pictured my life without him.

A weight was off of me. I didn’t realize how much his very presence had dragged me down. But then I knew. I felt the lightness. The lightness of My Being. My Being left. My Being Free.

And there was no going back.