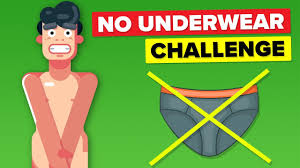 My panty-less day: A revelation of freedom

Two days ago, I went out and I forgot that I had never put any underpants on. I had my pants on with nothing underneath. I had worn a skort the day before, so I think that had something to do with it.

When I realized I was panty-less for the first time in decades, I kind of had an inner smile.

It was my secret from the world that I, as a woman, was walking the Earth with no underwear on.

At first, I actually felt a little shy. But as the morning became afternoon, I felt a new sense of freedom.

And so the next day, I didn’t wear a bra either! I have a shirt with a built-in jacket so it’s all one piece, nicely covering the girls. I went out into the world with a tasteful shirt that kept anything untoward from peeking through.

It was one of the most comfortable days I have had in a really long time! I realized how much undergarments were restricting my movement. Plus the daily tugging and the pulling and the itchiness. It was completely dissipated by this decision. And so, several times a week I walk the world with just my clothes on.

I did some research. There are schools of thought that going braless might be good for breast health, since many bras restrict circulation. There are also many woman who sleep in their bras. Currently, this is not recommended anymore.

A French study some years ago found that going bra-less may actually improve perkiness. Bras prevent your girls from having to fight gravity on their own.

I highly recommend you try a “bra-cation” and/or a panty retreat for a few days.

Only if you are comfortable with it. See if you notice a difference as well. There’s something to be said for “swinging free” as the guys say. With no rescuing panties from in between butt cheeks all the time.

Of course this might not be appropriate for every item in our closets. But those sweat pants or long skirts or peasant dresses may feel like vacation clothes when worn alone. Not to mention less laundry and who’s not for that? Less laundry means less water usage. And on Global Climate Strike Day, we are helping humanity.