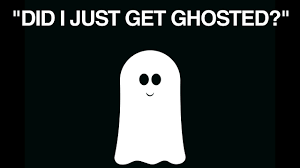 “Ghosted” by Your Ex or Male-Pal?: New Terms For Bloodcurdling Behavior

Have you been “Ghosted” by your Ex or non committed male-pal?  In this Halloween season, the term “Ghosted”seems highly appropriate.  If you’ve been out of the horrors of the dating scene, let me enlighten you about “submarining,” “bread crumbing” and other unpleasant dating phenomena men will subject you to.

If you are like me, you have already been “ghosted’ by your Ex, which means you have not seen their frightful face nor heard a ghoulish word from them in ions. ( What d’ya know?  Dreams really DO come true!)

There is still the possibility that you have merely been “benched” and don’t know it yet.  That is when a man puts you on a “bench” while he goes off and dates “someone better, ” assuming he can always come back to his own personal version of “Forrest Dumped.”

With every generation there are new terms created to describe the cruel, unfair and wicked ways men do their version of “ending” a relationship.  Back in our high school days, we were, “dumped” or “ditched” or “dropped.”  This usually involved a face-to-face conversation, or at worst, a note.  With the advent of technology into this ever complicated scenario, we can now be fooled into thinking we are in a serious relationship when we are merely being “Cuffed.” “Cuffing” happens in the fall and winter months when a man would rather be “cuffed” to a woman then be alone on a cold, dark night.

Feeling like you’ve landed on a different planet? Let me wave my magic wand and illuminate some things for you.

Ever been “submarined?”  I bet you have.  That’s when a man goes away and then pops back up again like nothing happened.  They are just back in your life and you should welcome them without ever bringing up their prolonged absence. Most logically, they were seeing someone else and bread crumbing you.

Oh, you don’t know what “bread crumbing” is?  Yes you do! That is when a man texts you flirty, dirty, text messages.  These sexually charged notes make it seem like he is interested in you so he can “trick” your “treat” without putting in any effort.

Let’s face it, the days of a man pulling up in a nice car and opening a door for you have been replaced by hook-up only invites with 140 characters or less. Way less. My last relationship went backwards by my standards.  It started out with meals and then went to coffee which then went to texts only which then when to me blocking him forever.  It gives new meaning to the term “blockhead”.  See, we can have fun terms for bad behavior too!

So all of you Ghosters out there, chill out!  No bones about it. The only man that haunts my dreams is named Ryan Gosling.  Yes men, Ryan is our new standard of excellence.  Scary huh?