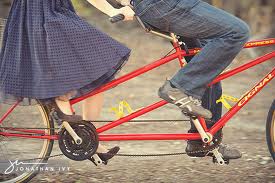 This morning, I saw a couple riding a tandem bike. That goofy looking thing that was called a “bicycle built for two” when we were kids. My ex and I had a standing joke about tandem bikes. He thought they were ridiculous. I thought it’d be a fun couple thing to do on a Sunday morning instead of reading the paper and drinking coffee. It became a running joke between us. Whenever I did something I knew he liked, say make a special meal, I’d say, “Does this mean we can get a tandem bike?” And before I could finish the sentence, he’d cut me off with a resounding, “No!”

When I saw that couple on the bike today, I realized all that it represents in a relationship. When you’re riding one of those, the rider in front controls the pace of the bike and where it’s going. The rider in back just pedals, happily going wherever the other person chooses. A couple doing this has to stay in sync so they can ride without falling over.

In my past relationship, that would’ve been impossible. There’s no way I’d want to be anything but the front rider, controlling everything. But he’d also never want to take the handlebars and lead, because he’d never want the responsibility of choosing where we’d go.

I see now that’s because we were never a Tandem Couple. We were two people that would much rather ride our own separate bikes. That way we could we could ride our own way. That worked for awhile, that independent-from-the-other way of thinking. We were actually proud of this. We were glad not to be one of those “clingy couples” that had to call their spouse from the grocery store to find out which lunchmeat to buy. “Those poor saps!” we mocked.

I thought that was the kind of relationship I wanted. But now that it’s over, I realize I don’t want that. I want a relationship where I can let go. I wouldn’t mind sitting back and letting someone else occasionally take the lead…pick the path, and go down that path with him, having blind faith that it’s the right one. And if it turns out it’s not, we can pick another path, and we can go down that one…in Tandem.

Comments are closed, but trackbacks and pingbacks are open.